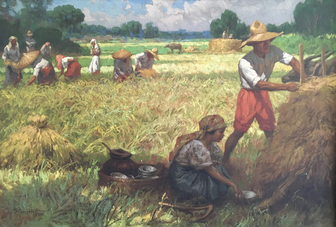 Harvest, 1930. Oil on Board
On May 30, 1892 a boy named Fernando Amorsolo, who was destined to become one of the most celebrated artists in Philippine history and the first to be designated a National Artist, was born in the Paco neighborhood of Manila. President Ferdinand Marcos awarded him this honor posthumously, four days after his death. Amorsolo’s immense popularity, which grew even more after his death, was attributed to his glorification of the Philippine culture, his rejection of Western ideals of beauty, but mostly the perfection of his brush stroke. Although he lived during a tumultuous and violent time in the Philippines and experienced much personal tragedy, he chose to see and paint the positive facets of life. This decision proved to be the most admired and most criticized aspect of his work. His career and productivity reached a peak between 1915 and 1940, also known as the “Golden Period”.

At seven months of age his father moved the family to the small town setting of Daet in Camarines Norte where Amorsolo developed his love for the simple rural life, which would become the foundation for his artistic output throughout his career. After the death of Amorsolo’s father at age eleven, the family returned to Manila where Fabian de la Rosa, first cousin to Amorsolo’s mother and a prominent Philippine painter, became a mentor to the young, aspiring artist. This move was pre-arranged by Amorsolo’s father before his death, as he asked his wife to promise that Fernando would receive a superior education in art. Despite family financial hardships, Amorsolo graduated with honors in painting and drawing from the Art School of the Liceo de Manila. After graduating from the Liceo in 1909, he entered the University of the Philippines' School of Fine Arts at the young age of seventeen, where de la Rosa worked as an instructor at the time. Amorsolo won top prizes in competitions at both of his schools. During college, contemporary Spanish masters Joaquín Sorolla Bastida and Ignacio Zuloaga most heavily influenced Fernando Amorsolo. Other primary influences included the Spanish people, court painter Diego Velázquez, John Singer Sargent, Anders Zorn, Claude Monet, and Pierre-Auguste Renoir. In 1916 Amorsolo graduated with honors and simultaneously obtained employment as an art teacher and commercial artist. The same year he also visited Spain for seven months under a sponsorship by a Spanish citizen named Enrique Zobel de Ayala, and was exposed to European modern artists and French Realists, Impressionists, and Post-Impressionists. Next, he briefly visited New York City, where he would later hold a solo exhibition in 1925. These short, but international trips, enlarged Amorsolo’s artistic toolkit and helped him gain recognition outside of the Philippines. Amorsolo married twice and fathered fourteen children, five of which became painters.

Amorsolo set up a studio when he returned to Manila and painted diligently and quickly in the 1920s and 1930s. Rice Planting (1922) was the favorite of the Commonwealth of the Philippines and was featured on posters and tourist brochures. From 1938 to 1952, Amorsolo served as the director of the Art Department at the School of Fine Arts at the University of the Philippines. He received numerous distinctions including a first prize at the New York’s World Fair for Afternoon Meal of Rice Workers (1929), an UNESCO gold medal of recognition (1959), the Rizal Pro-Patria Award (1961), the Araw ng Maynila award (1963), and the Gawad CCP para sa Sinig, from the Cultural Center of the Philippines. Beginning in the 1950’s Amorsolo produced approximately ten paintings a month, achieving a tremendous amount of commercial success. The following museums include work by Amorsolo: The Ayala Museum (Manila), The Central Bank of the Philippines (Manila), The Lopez Museum (Manila), and The National Museum of the Philippines (Manila).

Amorsolo was known as “The Painter of Philippines Sunlight” because his illuminated landscapes displayed the magnificence of the country’s sunshine and portrayed traditional Filipino customs, culture, fiestas, and ordinary occupations, such as rice harvesting and mango picking. His pastoral works presented “an imagined sense of nationhood in counterpoint to American colonial rule” and were important to the formation of Filipino national identity. Amorsolo’s use of chiaroscuro—an Italian term for a backlighting technique meaning “light-dark” that involves the interplay of light and dark—became his artistic trademark as well as his greatest contribution to Philippine painting. In a typical Amorsolo painting, figures are outlined against a characteristic glow, and intense light on one part of the canvas highlights nearby details. Only one painting by Amorsolo is believed to include rain, as sunlight was his constant element. Art historian Eric Torres describes Amorsolo’s sunlight paintings as “…overflow[ing] with sweetness and optimism.” Others consider his countryside paintings to be the “true reflections of the Filipino Soul.”

Amorsolo also painted a series of historical paintings on pre-Colonial and Spanish colonial and wartime events, portraits of prominent politicians (e.g., General Emilio Aguinaldo), nudes, the dalagang Filipina (a tanned, clear-complexioned, slim, and soft-featured Philippine maiden), and a series on the Japanese occupation of the Philippines during World War II—which presented a stark contrast to his illuminated landscape paintings because they depicted scenes of death and suffering by the Filipino people. Many of his wartime paintings were displayed at the Malacanang Presidential Palace in 1948 and are considered to not only be a reference for Philippine history, but also the artist’s unspoken intolerance of foreign occupation. A family tragedy occurred during the war when Amorsolo’s younger half-brother, also an artist, was executed by his own countrymen, albeit Filipino guerillas—on suspicion of sympathizing with the Japanese.

Within the Vatican City, three Amorsolo paintings are displayed. One is hung at the Vatican Radio headquarters and the remaining two are at the Propaganda Fire—a missionary congregation. The paintings at the congregation serve as an important symbol of the Filipino contribution to the spread of the Catholic faith to other countries. Amorsolo’s major works, such as Maiden in a Stream (1921), The Conversion of the Filipinos (1931), The Bombing of Intendencia (1942), The Rape of Manila (1942), Defense of a Filipina Woman’s Honor (1945), and Sunday Morning Going to Town (1958), relate to distinct events in Philippine history.

The volume of paintings, sketches, and studies of Amorsolo is believed to exceed 10,000 pieces. His craftsmanship and speed of production have been compared to the efficiency of machines on the assembly line. Amorsolo is considered to be the most influential Philippine painter of the 20th century on contemporary Filipino art and artists, such as abstract painter Federico Aguilar Alcuaz. Even as his health deteriorated due to diabetes, cataracts, and arthritis, he continued to produce a substantial volume of works, in part to support his large family. His emotional state also greatly suffered after the death of two of his sons, one in 1964 and another in 1971. Fernando Amorsolo died on April 24, 1972 due to heart failure. Amorsolo’s friends and family describe his beautiful paintings as a mirror to his even more beautiful and pure soul. His children founded an art foundation in his honor in 2003 to ensure his legacy, style, vision, and dedication to the promotion of Philippine national heritage survive for decades to come. His grave marker in Marikini City reads: “Dedicated to a husband and father who led a life of simplicity and beauty and left a wealth of virtues…” –Amorsolo Family