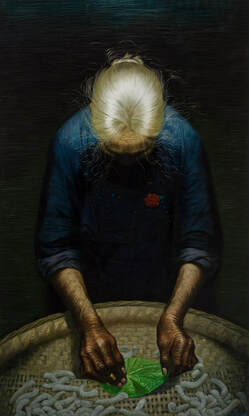 The Cultural Revolution in the People’s Republic of China that began in 1966 anesthetized China politically and affected the population socially and economically.  However, it served as a springboard and inspiration for young artist Luo Zhongli.  When he graduated from Sichuan Academy in 1968 it was the height of the revolution. Luo relocated to the rural Daba mountain area for ten years where he adopted the life of a peasant and worked in a steel factory.  While working there, he was influenced by the weathered, worn faces of the farm workers toiling in the fields and the old grandmothers tending the silkworms.  These influences would later become subjects of two of the more recognizable works in contemporary Asian art, Father and Spring Silkworms.

His revolutionary spirit and youth helped him endure many hardships during this period, but these sacrifices were anything but futile. Many artists, especially those of the 1980s, came to consider Zhongli’s works of photorealism as a model for their own works.  One prominent modern Chinese artist, Zhang Xiaogang, describes Zhongli as “the earliest avant-garde in our class”.   Zhongli’s works confronted Revolutionary Romanticism in the manner of the scar art movement and sent tremors throughout the art world with its overt truths and realism.

Luo Zhongli received international praise and is now one of China’s most famous and influential realist painters.  He is revered for his striking portraits of the people who live in remote southwestern China.  Rural life and his love of its residents are the main themes in his works.

The Chinese modern art community recognizes Zhongli’s large-scale portrait of an elderly farmer’s face from 1980, Father, as one of its most celebrated and significant works.  When Zonghli took home the Golden Prize (the top prize) for Father at China’s Second National Youth Arts Exhibition, Chinese realist painting turned in a new and progressive direction. Zhongli had painted a laborer’s sun-deteriorated face and cracked lips as bright and boldly as Chairman Mao’s, challenging the social ideology of the time. Two of Zhongli’s other paintings, Spring Silkworms and Praying, also won Chinese national prizes in the 1980s.  Since then, Zhongli’s art has been shown in solo exhibitions around the globe, including Belgium, France, Australia, England, the United States, and most recently, China.  Father was acquired by the National Art Museum of China in Beijing.  Spring Silkworms recently was represented by Tobin Reese Fine Art in a sale for a record high price for the artist.

Born in 1948 on the periphery of Chongqing (Sichuan province), Zhongli was influenced by his father and studied painting early. He graduated from Sichuan Art Institute’s Oil Painting department in 1982, stayed on one year as an instructor in the same department, and then four years later earned his M.A. at Antwerp Royal Art Institute in Belgium.

Zhongli returned to the school of his youth and is the current president and a professor at the Sichuan Fine Arts Institute, China’s oldest art establishment of higher learning.  According to Zhongli, the school’s mission is to “advance new ideas and promote enduring knowledge” and continually challenge and inspire students “to do their best possible work.” In addition to his titles in art education, he is also the current Vice Chairman of the China Artists Association and involved in numerous other art organizations.